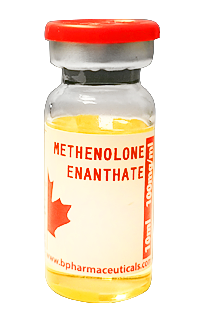 Methenolone is a Dihydrostestosterone (DHT) derivative, landing it in the family of DHT-derivatives and analogues. Methenolone is a modified form of DHT, where it contains a double-bond between carbon atoms 1 and 2 in the Dihydrotestosterone structure. This is known to assist in the stabilization of the 3-keto group which in turn increases the anabolic strength of the hormone. A 1-methyl group is also added to the hormone, which is responsible for allowing the hormone to resist hepatic (liver) metabolism and breakdown. The injectable format (Methenolone Enanthate) in particular is simply Methenolone with the Enanthate ester bound to the Methenolone chemical structure. Specifically, ‘Enanthate’ is Enanthoic acid (also known as carboxylic acid), but once bound to Methenolone it is properly referred to in chemistry as an ester bond (or ester linkage). Enanthoic acid is chemically bonded to the 17-beta hydroxyl group on the Methenolone structure. The addition of this ester augments the hormone’s release rate and half-life to favor a longer window of release. The primary reason for the augmentation of its half-life and release rate is because once Methenolone Enanthate enters the bloodstream, enzymes work to break the bond between the ester and the hormone, which takes a varying amount of time.